During her time in Chicago, she met her husband and business partner, Dr. Shawn Velez, an endodontist, and they now have 3 children! 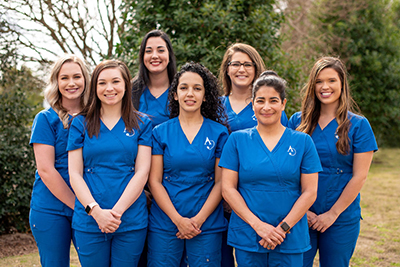 The surgical staff at Advanced Oral & Facial Specialists are experienced and trained surgical technicians, medical and dental assistants. They are fully trained to assist in surgery and provide monitoring support and care during the administration of IV sedation and medical emergencies. Our surgical staff is certified in BLS (Basic Life Support), ACLS (Advanced Cardiovascular Life Support) and DAANCE (Dental Anesthesia Assistant National Certification Examination) to ensure the maximum safety and care possible during your procedure.

DAANCE is a two-part continuing education program comprised of approximately 36 hours of self-study material and quizzes and a standardized, computer-based exam. The course is designed for oral and maxillofacial surgery assistants or assistants employed by other dental professionals with valid anesthesia permits.

Save It or Replace It Philosophy

Questions? Get in touch.